As you may know, each one of our locations chooses to a local charity to support when they first open. When Beatons Petersfield first opened, they chose to work with Fitzroy, a charity driven to help transform lives by supporting people with learning disabilities to do the simple things that make a real difference to their every day life.
Fitzroy has  taken a great opportunity to be involved again in this year’s Big Give Christmas Challenge, where every penny raised is doubled. To get the match funding they have only one week to raise £10,000, which the Big Give will then double.


Fitzroy have been embracing technology and how it is transforming the lives of people with learning disabilities in some really special ways. The difference that something as simple as an iPad and a really great communications app can make is astonishing and wonderful. With the money raised, they will buy iPads and an unlimited licence to a really good communications app. Many of the people they support aren’t able to communicate verbally and they can feel incredibly isolated and out of control of their own lives.

An amazing app called MyChoicePad uses 4000 Makaton signs and pictures to help people express their thoughts and feelings. This means they are able to have meaningful two-way conversations with the people who are important to them. Fitzroy have been trialling iPads in our services and have seen some remarkable results. One woman called Bex at their Malvern service was able to use the app to say ‘mum’ for the first time. You can read more about her story here.

If we can reach our target we will be able to help more people like Bex to be understood and heard. This link is where donations can


be made once the campaign launches https://secure.thebiggive.org.uk/project/fitzroy Please share it! The Big Give starts at midday on Tuesday 27th November until midday on 4th December. Donations can only be made between these dates. 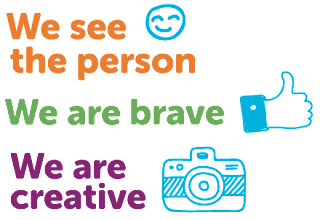