A Beatons Tearooms' Soirée is always an elegant and sparkling affair but seldom includes 'royalty'. However, on the Queen's real birthday (21st April) The Mayor of Blandford Forum, Councillor Steve Hitchings, local business owners and some of Beatons Blandford's most regular customers welcomed a very regal June King from Upton as their Guest of Honour at Beatons for its 'Scones, Thrones and Ninety Milestones' celebration.

June acted as 'Alice' - the character referred to in the specially composed song for the evening - set to the music of 'They're Changing the Guards at Buckingham Palace'. The team thought it would be great to have a real life 90 year old 'Alice' for the song to be sung to! Link to the full lyrics of the song being sung here. June was nominated by her mother, Mandy Clement-Doble when the tearooms appealed to the local press (who were magnificent in spreading the word and covering the event) to help them find 'an Alice' turning ninety, like the Queen. 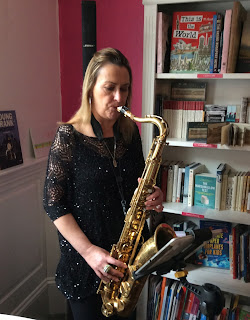 June may not be an Alice but is a somewhat of a celebrity in her own right, having been a Dorset resident all her life, have written a book 'Memories of a Dorset Parish' and still be giving talks on aspects of the county such as 'Dorset Buttons!' She made a great 'Alice for the evening' and even arrived in style in an open topped Bentley lent through Philip Palmer of FarmerPalmers near Poole, before being shown to her 'throne', a beautiful pink ribboned rocking chair kindly lent by neighbouring Mandy Ford and Lisa Douglas, co-owners of 4ever Vintage.

After a few words of welcome, 'Alice' and over sixty guests listened to girls from Blandford's Performing Arts Theatre Academy perform the piece before toasting the real Queen. Throughout the evening, local saxophonist Wendy Allen played a relaxing set of jazz classics.

However, perhaps the real stars of the show were the miniature cream tea gluten free scones, painstakingly created by Ben Moxham (Beatons Blandford Manager and Chief Recipe Creator for the group). Ben admitted perfecting their crumbly texture had been an extended 'labour of love'! Already being previewed at Beatons Blandford, they form part of the Gracious and Gloriously Gluten Free High Tea on the Beatons Elegant Options Menu launched that evening for those with different dietary desires.

Note! It will be available in all Beatons Tearooms from Monday 9th May... read more on our menu for those with special dietary desires.


We hope these comments give you a taster of the evening and that you'll come in and try our Elegant Options Menu - or indeed our classic menus which change throughout the day - soon!

'We had a ball and were quite in awe!!' Mandy Clement-Doble and family


'Just a quick email to say how much we enjoyed last night’s soiree, and we wish you all the best with the new menu! It was delicious.' Kathyrn Clark, Lesley Shand Funeral Service

With thanks to our local press and for more detail take a look at and check out Dorset Society magazine next month!